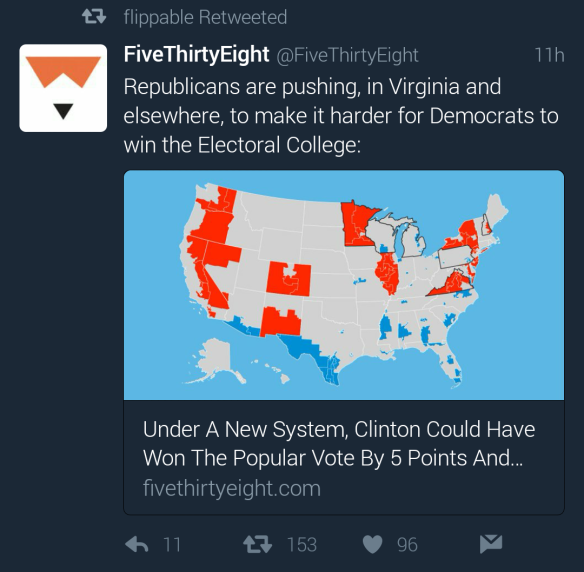 https://fivethirtyeight.com/features/under-a-new-system-clinton-could-have-won-the-popular-vote-by-5-points-and-still-lost/?ex_cid=538twitter
So this article addresses the question of what the issues would be if states divided electoral votes based on congressional districts won versus winner-of-the-state takes all.

Some states already break up their electoral votes this way and still others (such as VA) are considering moving in that direction.

Article notes that right now a move like this nationally would favor Republicans because of how the congressional districts are drawn (which include issues of gerrymandering and urban grouping) and would make it much harder for Democrats to get the needed 270 votes to win a Presidential election.

This seems to be another point in favor of reasonable redistricting. (You could argue it’s it’s another point in favor of moving to a popular vote system, but that’s for another discussion). It would seem that with reasonable redistricting (either done by independent parties or by using the same login applied the same way across all states) you’d ensure that votes match hot voters really voted.

Mind you, I get that it’s a complex issue and maybe no version of an electoral system will ever really reflect the majority views of the voters. Gives those of us trying to fight for a “best and fair solution” lots to think about.